Good morning readers. I’m sure you’ve all been on the edge of your seat waiting for my next post – particularly you Yankee haters. But fear not, I’m back.

Last week I took The Youngest Boy up to San Francisco to attend his first (and second!) Yankee game. We drove. We left home at 5:40 AM and arrived by 1:40 PM (after having stopped for an hour for “lunch” at an establishment called The Peachtree Inn. I use the term “lunch” loosely.). We took the I-5 the whole way. This will be the last time I make that mistake. California’s interior is hideous. I felt like I was being punished for wanting to see my Yankees. No, I’m not joking. There is nothing to look at, it’s a lunar landscape with no cell reception, and few places to stop for fuel. The places that do exist, gave me the willies. I’d always hated traveling over the Grapevine, but it pales in comparison with the horrible vistas far past it. And don’t even get me started on the cattle ranch smell that manages to waft into the car even with my car’s micro-particle filter “filtering” out the odor. Yes, I gagged. The highlight of the journey was passing a sign for the fabulously named, “Pleasant Valley State Prison”. Someone has a sense of humor.

By the time we arrived, I was in need of a beer – or two. The waiter at the restaurant, bless him, told me that Alex Rodriguez had been sitting in there earlier and that he always comes in. Only later when I saw him again, and questioned him further, did I find out that it was Mariano Rivera who goes in there often. That day he had his son with him. It’s just as well I didn’t see him. I couldn’t take the chance he’d recognize me and think I’m stalking him…

Once I was feeling normal, we headed out to the Ferry Building. 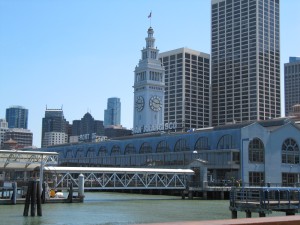 It’s a lovely place and each time I go, I discover some fabulous dessert or item I’d not seen the time before. The problem with this journey is I hadn’t gotten half a block before I realized the shoes I just changed into were hurting my feet. The Boy said, “But we’re walking. Shouldn’t you go put the other shoes back on?”

Two blocks into our journey, I was sure the skin on my right pinkie toe was completely removed. The Boy was not amused. This sentiment pervades the rest of my post. As I hobbled back (stupidly hiking Nob Hill in order to then hike back down it on the Powell side) I was near tears. Worst. Shoes. Ever. And here was a pickle – how was I supposed to get around San Francisco without comfortable shoes? How was I supposed to walk to the BART to take the train to the Oakland Coliseum for 2 nights in a row to watch my boys play if I no longer had flesh on my feet?

As I griped and shook the Band-Aid blister box, screaming, “Where’s my effing pain relief? It says right here, ‘provides instant pain relief’! Well I’m not relieved!!!”, I’m convinced The Boy was texting his friends, telling them how outrageously stupid his mother is. Yes, in this case he may have been right – but damn it, my shoes matched my outfit…

The following day, as we rode the BART to Oakland Coliseum, I was in some adorable polka dotted shoes from Urban Outfitters that had only cost $20. I won’t go into how long we combed the city until we found them…

Once inside the ballpark, The Boy was immediately taken with this Yankee experience. We had fabulous seats for only $40. According to my friends, “Nobody goes to the A’s games, they’re the red-headed stepchildren of the Bay Area.” Unlike my experience in Dodger Stadium, we could get close to the players to watch batting practice.  I will point out here, The Boy does not routinely watch baseball with me. It has something to do with my emotional conniptions, and the fact I start swearing like a drunken sailor when things don’t go our way. Like the other 2 males in the house, he will pass through the living room, and look over at me with avid curiosity, or (depending on whether I’ve just been bellowing) a small bit of sympathy. So to hear his delight at how close he was to my players gave me a small thrill. It would have given me a larger one but I was taking pictures: 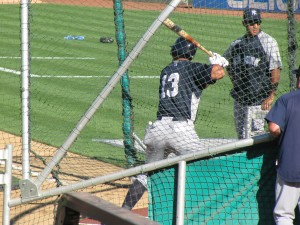 Already at this point, The Boy was handling this Yankee game better than his father had. It was all going swimmingly. The place even had a Guinness concession stand directly behind my seats. So what if the Oakland Alameda Coliseum has all the aesthetic charm of Pleasant Valley State Prison without the luxury of being sealed and warm? For the next two nights, it had my Yankee boys in it, and that was enough for me.

Well, once the game started, The Boy’s pleasure began to lessen. We had a foghorn directly behind us. Yes, a foghorn. One of those fans who emits “HOOOOOO HOOOOOOOOOOOOOOO!” sounds when her players so much as pick their nose. Yes, she was an A’s fan – although I’m happy to say the Coliseum was crawling with Yankee fans. One, when the ridiculously named Coco Crisp came to bat, shouted, “Boston reject!” Funny stuff. But I digress. Back to Foghorn. She was sitting behind The Boy and it didn’t take long for us to tire of her booing all the Yankee players. I considered saying something, but A-Rod did the talking for me. When Trevor Cahill, the A’s RHP plunked Mark Texeira to load the bases with 2 out in the 3rd, I leaned over and told The Boy, “Oh, no! He didn’t want to do that! Watch what A-Rod does now!” 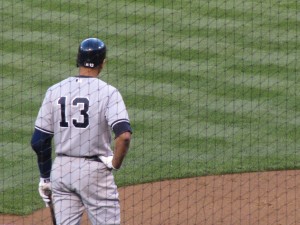 And sure enough, he hit a grand slam. 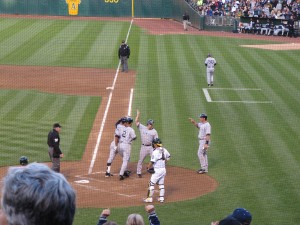 I was occasionally checking in with Twitter. After I recovered from my squealing and clapping (and, let’s be honest, zooming), I saw this (courtesy of Mark Feinsand, and had to favorite it):

“BloggingBombers I think I actually heard @SunnySoCal shriek all the way up in the press box when A-Rod hit that grand slam.”

Thankfully, either my shrieking or that blast, had the same effect on Foghorn as if I’d turned around and stuffed my blistered foot in her mouth, so it was all good now. There really weren’t many more peeps out of her, particularly after the 6th inning solo homer he sent rocketing out of the Coliseum. Yes!

By now The Boy, laughing delightedly at the score, looks over at me, and asks, “Are you OK?” This seemed to be a concern on everybody’s part, as Feinsand Tweeted, “I hope @SunnySoCal is all right.”

Yes, I was fine — if perhaps just a bit over excited. I was not alone. The Boy said, “Wow. Even I have to admit, A-Rod is hella good!”

One of my favorite Tweets of the night came courtesy of Marc Carig, The Star Ledger Yankees beat writer, who said, “A-Rod 5, Oakland A’s 1.”

It was a fun night and great to be at A-Rod’s first two-homer game of the season.

What was even more fun was the thought that we’d be doing it all again the following night!

We arrived Wednesday, and I was immediately displeased. Our seats, along the 1st baseline, weren’t as much to my liking as the ones the night before along the 3rd baseline, and now I had to go halfway across the Coliseum to get my Guinness. But it was fine, because we had a  floorshow. Yes, indeed, we had a drunk man 2 rows down and across the aisle who entertained us throughout most of the game – particularly when Jeter would come to the plate. As drunk people do, he would stand, sway, and spill his beer, as he hoisted his index finger in the air and shout, “Heyyyy, Jeter, I’m number 1, you’re number 2!” and then burst into fits of laughter. It played out every time he saw The Captain, and each time he did so with renewed vigor. It was almost as if he was surprised to see Derek Jeter in such a location. Clearly alcohol does affect your short term memory, boys and girls…

Soon I took The Boy over to the press elevator so I could have a short visit with friends Pete Caldera and Mark Feinsand. Other than spending a few moments with them,  the visit afforded us a respite from the biting wind and cold of the Coliseum.

It was shortly after our visit that I noticed a change in The Boy’s attitude towards A-Rod. I’m not going to say I ratcheted up my squealing, but merely that his level of tolerance had perhaps lessened. I remember the exact quote which put him over the edge. I was zooming in with my camera and said, “Oh, I do love it when he squats!”

It was bottom of the 5th inning. He looked over and said, “PLEASE STOP!!!”

Not long after this, A-Rod fell on his face trying to catch a routine pop up. The Boy took such delight in his failure, I felt like I was sitting with Feinsand.

It could have been other things which led to his intolerance of my ways. The blister, the ensuing madness to purchase a pair of shoes that I could wear “with everything” that wouldn’t rub on my sore tootsies, my insistence that he keep to the right on busy city sidewalks and not routinely cut me off, who knows? But towards the end of the trip, we definitely needed some downtime. So we drove up to visit my dear friends in Marin County. Along the way I bought a glorious orchid plant as a gift. It was a fine gift indeed when I plunked it down on the kitchen counter (alongside the gourmet spread she’d just laid out) and out hopped a tiny frog. He proceeded to flop ungainly along the counter until I caught him. Adorable, though perhaps not the finest gift I could have brought.

We stayed for lunch – for 8 hours. It was delightful. I hadn’t been up to her home since she was diagnosed with cancer in 2008, so it was a pleasure to be there once again. The Boy sat contentedly beside us on the sofa for those many hours, playing with his iPhone, and occasionally joining in on the conversation. What a little gentleman. I was a proud mother. And certainly, the following night when I met friends Jessica, and Rob at the Irish Bank for drinks and dinner, he once again sat and tolerated my silly, “Come along!” ways.

His tolerance fled on the long drive back to San Diego. Apparently he didn’t want to listen to Chris Moyles and his show for six hours straight. Who knew?

Well we’re back now. Back to a messy house, errands, bills to be paid, and my manuscript with its revisions still to be done. I’m trying to get caught up, but I keep getting distracted by news. This week, the Yankee organization lost two of its greats: “The Voice of God” long-time Yankee announcer Bob Sheppard at the age of 99, and today, I woke to the news that George M. Steinbrenner III has died of a heart attack at the age of 80. It’s a sad week for an organization that Steinbrenner made great. He was committed to winning and he built this club. I’m saddened. If it wasn’t for George Steinbrenner, I wouldn’t have had the above Yankee Road Trip with my son, so this one’s dedicated to The Boss. RIP.

6 thoughts on “Yankee Road Trip – Dedicated to The Boss”